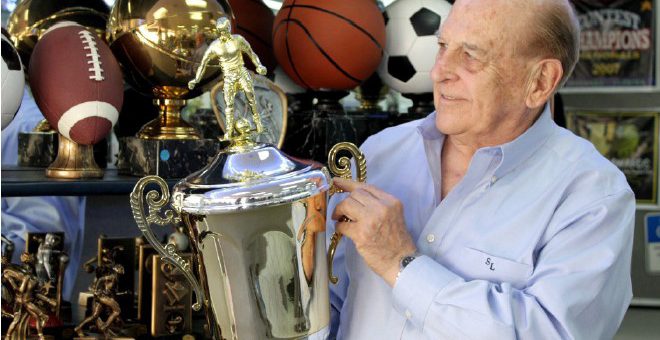 In February, Syd Levy was posthumously inducted into the
Awards and Personalization Association’s Hall of Fame, the
highest honor in our industry.
“Syd was a gracious and generous person that is a rare
jewel to all the lives he touched, both professionally and
personally.” Tropar’s Greg Della Badia, CAM, explained as
he announced the induction during the Awards Ceremony
in Las Vegas, NV. “He had a reputation for integrity and
was always the first person to show you something new and
cool. He would strive every day to help you out in any way
possible. Syd would invite people from all over the country
to come and learn from him so they could go back home
and improve their own businesses.”
Jim Nothers of Nothers the Award Store accepted the award
on Levy’s behalf.
Levy founded United Trophy Manufacturing Inc. in Orlando,
FL, and was a founding member of the Award Associates
of America (AAA). He passed away January 29, 2018, at
the age of 88. At the height of his entrepreneurship, he
employed about 200 people at five businesses: trophy, sign,
and promo product stores; a massive flea market; and a
popular amusement park.
Levy got his first taste of the industry in the late 1940s
when he turned to a family friend to get customized
jackets created for himself and the other members of his
championship-winning high-school football team.
At the time, there wasn’t an awards industry to speak
of. Jewelry shops and sporting goods stores sold awards
and engraved products. But by 1950, Levy was sourcing
trophies, jackets, and rings for schools in his region in
Ontario, Canada. Creating relationships with suppliers
and customers, he started his own trophy business. (The
Awards and Personalization Association didn’t get its
start until more than a dozen years later, as The Northern
California Trophy Dealers Association in 1964.)
He married in 1968 and moved with his wife to Florida,
founding United Trophy Manufacturing Inc. in downtown
Orlando, then a city of less than 100,000 people. At this
new business, Levy manufactured and sold trophies that
were engraved by his wife, Marianne also sewed names on
shirts. They grew the business to the point that they had
employees to handle production and personalization.
Levy beat cancer in the mid-’70s and went on to launch
additional businesses. In a nod to Marianne’s love of flea
markets, the couple opened Flea World in 1981 on 104
acres in nearby Sanford, FL. Levy called it “the nation’s
largest flea market under one roof.” At its peak, the flea
market welcomed more than 3 million visitors each year,
Levy had said, claiming it was the second biggest draw in
the area, second only to Disney World.
In 1985, Levy added a promotional products business,
United Advertising Specialties, next to United Trophy
Manufacturing. Sign World joined the businesses in 1987.
He also added a zoo at the flea market in the late 1980s. In
1990, he opened Fun World, a $5 million amusement park
with two mini golf courses, batting cages, carnival rides,
and a $1 million arcade, all adjacent to Flea World. The pair
became known as Flea World & Fun World.
The Levys used their success to give back to the community
through many philanthropic organizations.
Marianne once described her husband as “a trade show
junkie.” That was evident at the Awards and Personalization
annual international show, where Levy always visited every
booth an even thanked exhibitors for being there. When
new equipment and processes debuted at a trade show,
Levy would buy the new technology and incorporate it into
his business.
United Trophy is still doing business in Orlando, now a city
of 286,000. Levy’s awards store occupies more than 50,000
sq. ft., encompassing an entire downtown block.